The section “Art and Television”, introduced by Paesaggi TV (1970) by Mario Schifano in its first part, will create a parallel between 8 excerpts from TV shows on art, like Io e… and Come nasce un’opera d’arte, and the works of the artists featured in them: Vincenzo Agnetti, Gianfranco Baruchello, Alighiero Boetti, Alberto Burri, Giorgio de Chirico, Renato Guttuso, Michelangelo Pistoletto and Emilio Vedova. The exhibition will further explore the connection between contemporary art and TV language, pairing an installation by Giulio Paolini Apoteosi di Omero (1970-71) with 4 films that testify the artist’s collaboration with Rai for the realization of set designs for TV productions of literary classics such as Don Quixote and Moby Dick, or theater plays by Henrik Ibsen and Massimo Bontempelli. The exhibition will also showcase 2 works produced by Rai in which the television screen becomes a means for aesthetic and linguistic experimentation, such as Il televisore che piange (1972) by Fabio Mauri and C’era una volta un re (1973) by Eugenio Carmi. 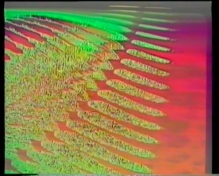